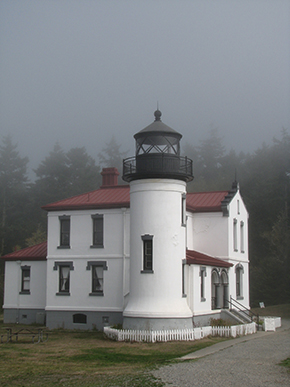 First built in 1890, then rebuilt in 1903, Admiralty Head was the last brick lighthouse designed by renowned German architect Carl Leick. During its later occupancy by the Army, the lighthouse was used as a training facility for the K-9 dog program. Although deactivated in 1922 and its lantern house moved to the New Dungeness Lighthouse in 1927, it has since been restored by the Washington State Parks. The lighthouse is kept open through a partnership between Washington State Parks and the Lighthouse Environmental Program (LEP).

Ships bound from the Pacific to Seattle must first pass along the Strait of San Juan de Fuca, which separates the Olympic Peninsula and Canada’s Vancouver Island, and then turn south and navigate through Admiralty Inlet before reaching Puget Sound. Two points define the entrance to Admiralty Inlet from the Strait of San Juan de Fuca: Point Wilson on the west and Admiralty Head on the east. Lighthouses were eventually placed on both of these points to guide shipping, and today, theKeystone – Port Townsend ferry connects landings located near the two points, providing a quick link between the northwestern part of the state and the Olympic Peninsula.
Captain George Vancouver named Admiralty Inlet on June 2, 1792 in honor of the British Navy’s Board of Admiralty. While surveying Puget Sound in 1841, Lieutenant Charles Wilkes of the U.S. Exploring Expedition named the headland on the western shore of Whidbey Island Red Bluff on account of the reddish color of the cliffs, but the name Admiralty Head later gained more common usage.

An act of August 18, 1856 authorized construction of Red Bluff Lighthouse atop the headland’s ninety-foot cliffs, and ten acres of land for the station were purchased in 1858 from Dr. John and Caroline Kellogg, early settlers of Whidbey Island. The lighthouse, consisting of a two-story wooden structure painted white with a light tower rising like a church steeple from one end of its pitched roof, was built on the headland during the second half of 1860 and became operational on January 21, 1861. Almost nineteen years passed before its companion light was established across Admiralty Inlet on Point Wilson.

Red Bluff Lighthouse employed a fixed, fourth-order Fresnel lens in its nine-sided lantern room to produce a white light at a height of 108 feet above the inlet. The lighthouse itself measured forty-one feet from the ground to the ventilator ball atop the lantern room.

Captain William Robertson, a “grey grizzled sea dog,” was appointed first keeper of the lighthouse. He had sailed around Cape Horn and reached San Francisco around the time of the gold rush, but then relocated to a 247-acre land claim on Whidbey Island in the early 1850s. Indians burned the Robertson’s log cabin home, but the family quickly rebuilt it, and Captain Robertson mounted a cannon in the yard to discourage another attack. During his four years as keeper, Robertson also served as coroner and postmaster of Island County.

In 1864, Asa Shinn Mercer, the newly elected president of the University in Seattle, visited Lowell, Massachusetts to recruit young women to relocate to Washington Territory to serve as teachers and help balance the none-to-one ratio of men to women. Two of the eleven ladies, known as the Mercer Girls, who traveled to Washington via Panama with Mercer that year were nineteen-year-old Josephine Pearson and Georgianna, her fifteen-year-old sister. The Pearson girls were accompanied by their father Daniel Pearson, who hoped the change in climate would improve his health. Josephine and Georgianna served as teachers in Coupeville on Whidbey Island, while their father served a watchman at the Puget Mill in Port Gamble. When Josephine died unexpectedly on August 21, 1864, Daniel relocated to Whidbey Island, where he was appointed the second head keeper of Admiralty Head Lighthouse later that year. Georgianna left school teaching and served as an assistant to her father starting in March 1865.
Daniel Pearson was joined in 1866 by his wife and two more children, Daniel and Flora, who came west as part of Asa Mercer’s second expedition. With two marriageable daughters living at the lighthouse, many suitors came calling. According to Flora’s memoirs, one Sunday, “There were fifteen horses with men’s saddles on their backs, hitched to the fence.”

When Georgianna married in October 1867, seventeen-year-old Flora became assistant keeper. Flora kept the log and was a favorite of the lighthouse inspectors. After describing an inspection visit in 1875, she wrote:

By order of Lt. Commander Louis Keurpoff (inspector): Be it hereby known, to whom it may or may not concern: All light keepers, either principal or assistant, in this domain of our beloved Uncle Samuel, are expressly forbidden to depart from the Territory of Single Blessedness and take up their abode in the populous State of Matrimony unless said departure be permitted and sanctioned by the Lighthouse Inspector.

Undeterred or perhaps with the inspector’s blessing, Flora married William Engle in 1876, but continued to serve as an assistant keeper at the lighthouse until November 1878, one month after the resignation of her father. Upon Keeper Pearson’s death in 1897, the following information regarding his service was printed in the Seattle Post-Intelligencer: “He was keeper of the Admiralty Head Lighthouse, and for 13 years, he was never absent from his post for one night. His great regularity and promptness in the business affairs of life, as well as his strict integrity in all matters, made him a most remarkable man.”

Lawrence Nessel was transferred from his position as first assistant at New Dungeness Lighthouse to replace Daniel Pearson as head keeper, while Richard B. Hollbrook was appointed assistant keeper in place of Flora Engle. The position of assistant keeper was eliminated in 1882 as part of a cost-saving measure. On December 15, 1897, Keeper Nessel noted the following in the station’s log: “Light at Point Wilson in operation for the first time.”

Using a $3,500 appropriation for general repairs at Admiralty Head, an unoccupied space in the attic of the dwelling was enclosed and converted into a watchroom in 1875, and the two sides of the lighthouse most affected by winter storms were covered in rustic siding. A boathouse at the base of the bluff housed the station’s boat that could be used to reach Port Townsend. In 1880, “an inclined plane, with a winch, was built to raise supplies from the landing beach to the crest upon which the station” was located. The following year, a wooden tramway with an iron boat car was constructed on the beach leading to the boathouse for launching the station’s boat, and Hains mineral-oil lamps replaced the lard-oil lamps previously used in the lantern room.

During the Spanish-American War era at the end of the nineteenth century, the government acquired another 123 acres from the Kellogg family for the establishment of Fort Casey near the lighthouse. It seems the best points for placing lights to guide friendly vessels into a passage are also the best points for placing forts to keep unfriendly vessels out. Lighthouses and defense works are close neighbors at several sites along the west coast, including Admiralty Head, Point Wilson, and Marrowstone Point in Washington, Point Bonita and Fort Point near San Francisco, and Point Loma in San Diego.

As the wooden Admiralty Head Lighthouse stood on an ideal location for one of the fort’s gun emplacements, it was relocated in 1899 as a temporary measure while a new lighthouse was built. An act approved March 3, 1901 appropriated $12,000 for a new lighthouse, and the War Department exchanged two suitable pieces of land nearby for the old lighthouse reservation. When the War Department found the invited bids for constructing the replacement lighthouse exceeded the appropriation, it was forced to undertake the work itself, and Major John Millis was placed in charge of the project.

The light was activated atop the new lighthouse on June 25, 1903, and the original lighthouse was repurposed to house noncommissioned officers and, for a short time, a temporary medical clinic. In 1928, the wooden lighthouse was torn down and the lumber used to build a house on Whidbey Island.

The second Admiralty Head Lighthouse consisted of a two-story dwelling linked to the base of a circular tower of roughly the same height by a one-story foyer. Three bedrooms were located upstairs in the dwelling, while the kitchen, dining room, and a living room were downstairs. Built in a Spanish style using brick covered with stucco, the lighthouse was a one-of-a-kind and was said to be the most comfortable residence in the territory, featuring an indoor bathroom and laundry room.

By the early 1920s, the bulk of marine traffic was powered by steam rather than wind, permitting the modern vessels to hug the western side of the inlet. Admiralty Head Lighthouse was thus no longer of consequence, and the second lighthouse was extinguished after just nineteen years of service. On June 30, 1922, Hans P. Score, the last keeper of the lighthouse, made the following log entry: “After tonight Admiralty Head is discontinued by order of Superintendent of Lighthouses Mr. Warrick.” In 1927, the lantern room was removed and placed atop the newly reconstructed tower of New Dungeness Lighthouse.

Admiralty Head Lighthouse sat vacant until World War II, when Fort Casey was reactivated. The lighthouse was painted olive drab and was used as barracks for the Army’s K-9 Corps that patrolled the fort and nearby beaches at night. Following the war, the lighthouse again stood empty for a time before Washington State Parks and Recreation Commission acquired 100 acres of Fort Casey’s battery area in 1955 for use as a state park and historical monument. The Island County Historical Society initiated a restoration effort shortly thereafter, and a replacement lantern room, featuring vertical astragals rather than the more complex diagonal ones found in the original, was built in the 1960s using thin sheet metal and Plexiglas windows.

When cutbacks led to the loss of interpretive park rangers at Admiralty Head Lighthouse in the early 1990s, Washington State University’s Island County Extension offered to staff the lighthouse with volunteers in exchange for office space in the structure.

After plans for the original lantern room were located, Dick Malone, a lighthouse docent and former high school metal-shop teacher, and Chuck Juras, Fort Casey State Park director of maintenance, took them to Archie Nichols of Nichols Brothers Boat Builders in 2009 to devise a strategy for building a replica. To control costs, donated materials were found and three high school metal shops were recruited to provide the labor. Oak Harbor students built the cross-barred central section, Coupeville students built the roof, and South Whidbey students built the base section, which includes a door.

The three sections were united at South Whidbey High School on February 2, 2012, and the rest of the school year was spent finishing the lantern room. On August 23, 2012, a crane provided by Island Crane Services, Inc. lifted the old, inaccurate lantern room off the lighthouse’s tower, and two hours later, after holes were drilled in the new, authentic, 5,000-pound lantern room, it was placed atop the tower. At long last, a worthy lantern room sits atop the unique and stunning building that is Admiralty Head Lighthouse.