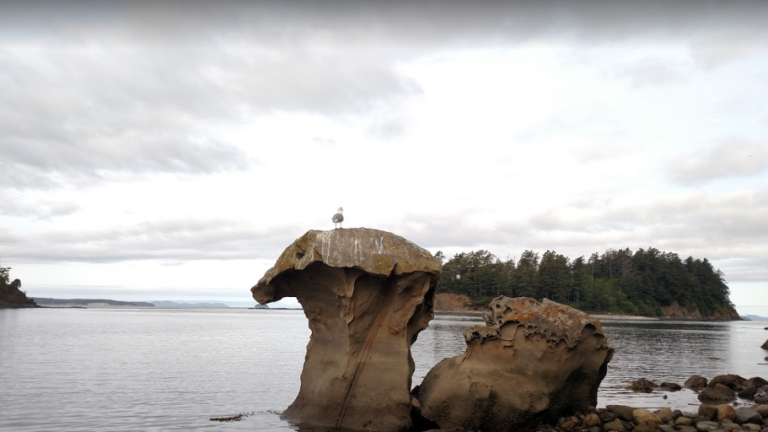 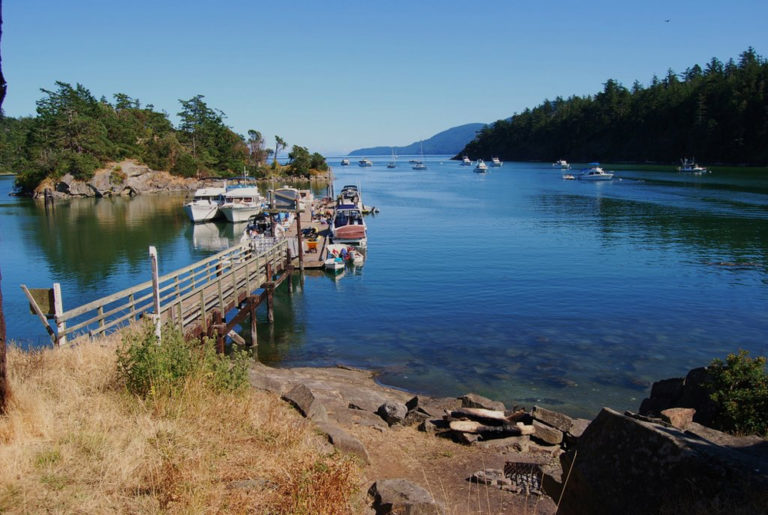 Fossil bay got its name from the fossils of small marine life that are found in the surrounding rock faces. The seashells and fossils were deposited into the sandstone rocks when portions of the island were once part of the sea floor in Baha California. There are 16 mooring buoys to tie up to in Fossil Bay as well as two floating docks–One of which is seasonal. With both docks in place Fossil Bay offers 660 ft of floating dock space which tends to fill up fast on holidays and on weekends during the summer months.

When you tie up to a dock at any Washington State park you pay .50 cents per foot so a 40 ft. boat would cost you $20. Some boaters choose to simply anchor in Fossil bay rather than tie up to a buoy to avoid the $10.00 buoy fee (2011), however they are still expected to go ashore and register at the pay station so the park service can keep accurate attendance records.

Dawn is when you arise (if you want), and the smell of steak drifting across from the barbecue pits on the sand spit calls you for dinner. In between those hours, you’re free to do anything you want without interference, because there is none. No stores, no hotels, no fast food franchises … no civilization other than a floating pier and a handful of mooring buoys in the protected harbor.

Sucia Island is actually a cluster of 11 islands (the charts say “Islands”) covering more than 500 acres at the northern end of the San Juan Islands, 80-odd miles from Seattle and just a few miles from Anacortes, the popular N.W. charter yacht center. Purchased by the Puget Sound Interclub Association in the 1960s and entrusted to the State Parks and Recreation Commission, the islands are now a marine state park complete with hiking trails, picnic and camping sites, and mooring floats and buoys.

Fossil Bay is just that and, given some directions by other boat owners, you can usually find fossils from the Cretaceous Period exposed on rock faces (but no collecting!). The San Juan Islands were all shaped by the monstrous glaciers of the Ice Age that scoured and gouged the granite, producing the long grooves that became Fossil Bay and the other coves on Sucia.

The island’s history includes a hunting ground for local Indians, as well as a smuggling haven for everything from Chinese laborers in the 1800s to rum during Prohibition.

Because the island is so undeveloped, it remains rich in marine and wildlife. Crabs and salmon are plentiful, bald eagles soar overhead, and even the tidepools are filled with creatures.

The Sucia Islands can be filled on summer weekends, when even small boats can make the crossing from the mainland, but the spring and fall have reduced crowds. Sucia is also a civilized anchorage, with a ban on generators after 10 p.m. and strictly regulated “quiet hours” for you to enjoy a good book, watch the stars, or simply listen to the deafening silence of non-civilization.