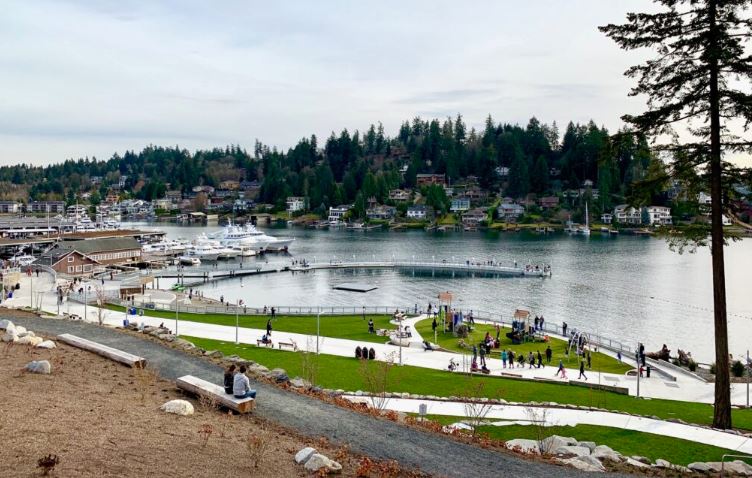 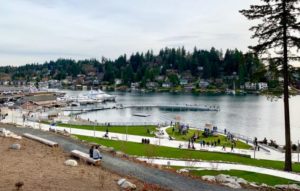 City leaders first made acquisition of waterfront along Meydenbauer Bay part of its parks-and-open-spaces plan in 1987. Between 1992 and 2007, the city acquired 12 properties, nine of them private homes perched above the lake. The properties were all sold voluntarily.

Still, Grindeland recalls many public meetings with neighbors worried about the size and makeup of the crowds who would inevitably descend on a broad, sandy, swimming beach.

“Whenever you’re going to change the neighborhood, there’s consternation, complaints that ‘We don’t want those people,’” Grindeland recalled.

And that was before downtown Bellevue’s post-recession boom. The neighborhood has added more than a dozen new apartment buildings and its population has swelled to almost 14,000, according to the city, double what it was in 2010.

Background:
The City Council approved a contract with IMCO General Construction to build the first phase of Meydenbauer Bay Park.  Construction began in early May 2017 and was completed in March 2019.  Project highlights include:

Work occurred primarily west and northwest of 99th Avenue NE to connect with and expand the existing park, which was closed during construction.

The Meydenbauer Bay Park and Land Use Plan, recommended by the Steering Committee and Park Board, was unanimously and enthusiastically adopted by Bellevue City Council on December 13, 2010 (Resolution No. 8182).  The park plan provides for a memorable shoreline experience, improves pedestrian access to the water and downtown, employs positive environmental shoreline improvements, helps increase awareness of and understanding about the area’s rich boating and whaling history, while also providing multiple opportunities to gather, play and recreate.  The plan will be phased (designed, permitted and constructed) over many years as funding is made available.